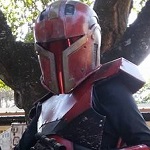 Since I became a member and especially since the Jedicon my city last August, many people came to me also willing to build their own armor and join the fan club. As always there are many people who just talk and talk and the "words are the wind". But some of them go ahead with their ideas projects.

So, I would like to register here names of some people and their progress.

- Gleickson Trancoso (Casen'aar Sin) - He has introduce herself here and even got the files from legacy armor from his size. He started making his helmet in pep and fiberglass. Unfortunately, he was fired from his job recently ,then some progress as the armor may take more time than he planned. He lives in Belo Horizonte - Minas Gerais State, as me.

- Belle Nerissa (Mesh'la Cabur) - She and her mother came to me very excited about the idea of armor. They have started to buy the necessary materials, like aluminum plates, tools, paints, etc. She lives in Belo Horizonte, as me.

- Cristiane Aguiar (no mando name yet) - Mother of Belle - Situation as above.

- Miguel Faria (Burc'ya Alor) - He is a very experienced cosplayer. He already has an armor that he makes some years ago, but EVA. He is very interested in making a new armor of aluminum, he is also acquiring the necessary materials. He lives in São Paulo City - São Paulo State.

I have at last other 6 people ( 4 women and 2 men) in my city who are interested but dont know how their progress is going.

We still have the idea of a night owl squad. We are talking about it ... but I say to all, always, to choose the first armor by intimate conviction.
Nach oben 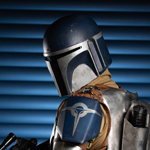 Impressive, what an impact you have on other people.
If they can write in english as good as you do, they are all free to register and show us their progress and plans. They could ask us for tips directly and we are supporting them with our knowledge like we support all our members.
And I still love the idea of a night owl squad! 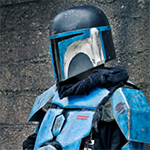 Nice, as you said, some just talk and some build

but it seems like you know these people and they can get this done.
Always good to have some Vode in the region